Is Carrageenan Safe To Eat? 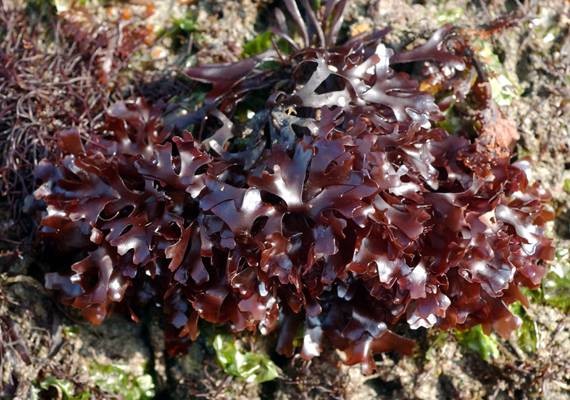 Carrageenan is a broad term used to describe a variety of food-grade polysaccarhides (and a non food-grade derivative which is technically known as poligeenan) obtained from many different species of seaweed. Food-grade carrageenan has been used in cooking for hundreds of years as a thickening, stabilizing and gelling agent. Carrageenan is commercially produced in three forms: iota, kappa and lambda. Each form is derived from different species of seaweed, possess different molecular structures and are used for different purposes in food applications. Lambda carrageenan is widely used in many commercial vegan foods, such as salad dressings, veggie dogs, plant milks and ice creams, just to name a few (it has since been replaced with gellan gum in many commercial vegan foods). Irish Moss (Chondrus crispus) is a commonly known source of carrageenan (it contains about 55% by weight) and is frequently used in the homebrewing of beer as a clarifying agent.

For the block and wheel cheeses in The Non-Dairy Evolution Cookbook, kappa carrageenan is used as a firming agent to provide textures ranging from soft to very firm. It is essential for producing the finest non-dairy cheeses that mimic dairy cheeses in texture and melt-ability. Iota carrageenan is used to replace the function of gelatin in my marshmallow recipe. Please note that these specific cheeses are the only recipes that call for kappa carrageenan and the marshmallows are the only recipe that call for iota carrageenan. This keeps carrageenan consumption to a minimum.

However, I occasionally have readers who still express concerns over the inclusion of carrageenan in these recipes and I have found it necessary to defend its use. Their concern is based upon research studies of carrageenan by Dr. Joanne Tobacman, an associate professor at the University of Illinois in Chicago, who made claims that this naturally occurring seaweed derivative causes gastro-intestinal inflammation and pre-cancerous lesions when fed to small laboratory animals.

What many don’t realize is that Dr. Tobacman was actually studying a moleculary degraded form of carrageenan called poligeenan, which has never been used in food applications, and is used in other applications such as barium contrast solution for X-rays and CT scans (unfortunately, the broad term “carrageenan” is often and erroneously used to describe both poligeenan and food-grade carrageenan, which causes confusion between the two). She then suggested that human digestive acids can convert food-grade carrageenan into the degraded form, but without any living organism studies to support her theory. Conducting a controlled study of food-grade carrageenan would seemingly be impossible since the term does not refer to a single substance derived from a single source.

Dr. Tobacman filed a petition with the FDA in 2008 asking a revocation of carrageenan as a food additive, but the FDA denied her petition in June of 2012. She also lobbied the National Organic Standards Board and was rejected. Her research credibility is also flawed by the fact that she tried to have carrageenan declared as an unsafe food additive based upon weak technical arguments a decade before the University research began. Food regulatory agencies in the United States, the European Union and the United Nation’s Food and Agriculture Organization/World Health Organization (FAO/WHO) repeatedly review and continue to approve carrageenan as a safe food additive.

Regardless of the flawed studies and rejected theories, a number of professional and self-appointed consumer watchdogs and health advocates have revived Dr. Tobacman’s anti-carrageenan crusade, producing numerous web pages filled with words condemning carrageenan as an unsafe food additive for human consumption. This negative media hype has prompted a demand for food companies to remove carrageenan as a food additive. While some food companies are yielding to this consumer pressure, other food companies are treading more cautiously since the research studies are flawed and scientific evidence is lacking.

Joy Dubost, PhD, RD, CSSD, a food scientist and spokesperson for the Academy of Nutrition and Dietetics, believes the FDA is correct in taking a slow and steady approach, and she sees no reason to sound the alarm about carrageenan. She believes researchers will continue to study the effects of carrageenan but says she has no plans to alter her advice to clients based on the current scientific literature. “Now, with that said, there’s still individual choice,” Dubost says. “So if consumers are concerned about carrageenan or feel that they may be having a specific flare-up, then of course I’m going to advise them that they may want to read the labels. Some companies are removing it from their products, but there are quite a few that aren’t. The key would be reading the product label and the ingredient statement. But at this point, as far as general guidance, I would not say to avoid it based on the scientific evidence.”

Animal feeding studies which began in the 1960s have demonstrated that once poligeenan enters the blood stream in large enough amounts, pre-cancerous lesions begin to form, but these lesions have never been observed in animals fed with foods containing food-grade carrageenan. Food-grade carrageenan passes through the digestive system intact, much like food fiber. In fact, food-grade carrageenan is a combination of soluble and insoluble nutritional fiber. Even if food-grade carrageenan had exhibited toxicity in small animals, one cannot make an assumption that human biology will respond the same way, especially when small laboratory animals are force fed amounts much larger than a human would ever consume. This would be like saying, “since chocolate is toxic to dogs it must therefore be toxic to humans”. And since when do vegans rely upon animal research studies, the very practice which we so vehemently oppose?

The Standard American Diet (SAD) consists of a high percentage of processed, animal-based foods loaded with preservatives, hormones, artificial dyes and other chemicals. Making such claims about food-grade carrageenan without also ruling out these factors is scientifically invalid. Negative effects can be linked to just about any food or food ingredient that is consumed in excess or by individuals who are sensitive or allergic. This same ingredient bashing has occurred with soy products, gluten, plant oils – and now gellan gum.

Consumer watchdogs have not conducted any controlled laboratory experiments themselves and are merely repeating inaccurate conclusions based upon Dr. Tobacman’s flawed studies (which have been repeatedly rejected by the scientific community). This kind of fear mongering can be very damaging to the non-dairy food movement. These individuals would do far more service to consumers by researching their sources thoroughly and presenting only what can be substantiated by good science. Unfortunately we live in an era of media frenzy that rewards controversy.

While it’s true that some people may be sensitive to food-grade carrageenan, this is not due to toxicity but due to its nature as a food fiber. Psyllium is also an inert and non-toxic food fiber and ingestion can cause bloating and cramping in sensitive individuals. Consuming too many raw greens can also cause intestinal distress in some individuals but this doesn’t suggest that raw greens are toxic. Stomach discomfort in sensitive individuals is a far cry from the misguided claims that food-grade carrageenan causes intestinal lesions and is a proven carcinogen. This has never been demonstrated or proven in humans. If this were true, federal law would require labeling of any food item containing carrageenan as potentially cancer-causing. In a small percentage of the population, carrageenan may provoke an allergic response, although this can occur with many other food substances, and does not infer toxicity but rather a personal immune reaction to a particular substance.

The food-grade carrageenan used in the block and wheel cheeses in my cookbook is derived from a species of seaweed called Kappaphycus alvarezii, hence the name “kappa carrageenan”. Research has actually demonstrated that Kappaphycus alvarezii has significant anti-cancer activity. Gigartina is another species of red seaweed and is used in the extraction of lambda carrageenan, in a similar manner as Irish Moss. Gigartina is wild harvested in various forms including Gigartina Skottsbergii off the coast of Argentina and Chile, and Gigartina Stellata from the coast of France. Research has been done on Gigartina Skottsbergii in treating the herpes simplex virus, revealing that it actually stimulates an immune response that can fight the virus and keep it at bay.

I have researched both sides of the carrageenan controversy thoroughly and with an open mind. My opinion about carrageenan safety is not influenced by any carrageenan manufacturer because I don’t work for any such manufacturer. My opinion is based upon the scientific data I have examined, but more importantly by my own experience with this ingredient. I’ve been consuming kappa and iota carrageenan for several years now in the course of developing my non-dairy cheeses and plant-based marshmallows and I have never experienced a single negative side effect from its consumption. If I felt it was dangerous, I wouldn’t consume it.

The bottom line is that you’ll have to decide for yourself who and what to believe, and weigh the unproven health risks against the culinary benefits of using carrageenan. Only you can determine what’s right and wrong for your body. And don’t just rely on my opinion; do your own research – but keep an open mind. You will find many opinions in the media but they are just that – opinions. However, if you still feel certain that you are sensitive to carrageenan, or you are concerned about its use, simply avoid the block and wheel cheeses and the marshmallows in my cookbook. There are many other non-dairy recipes to choose from.