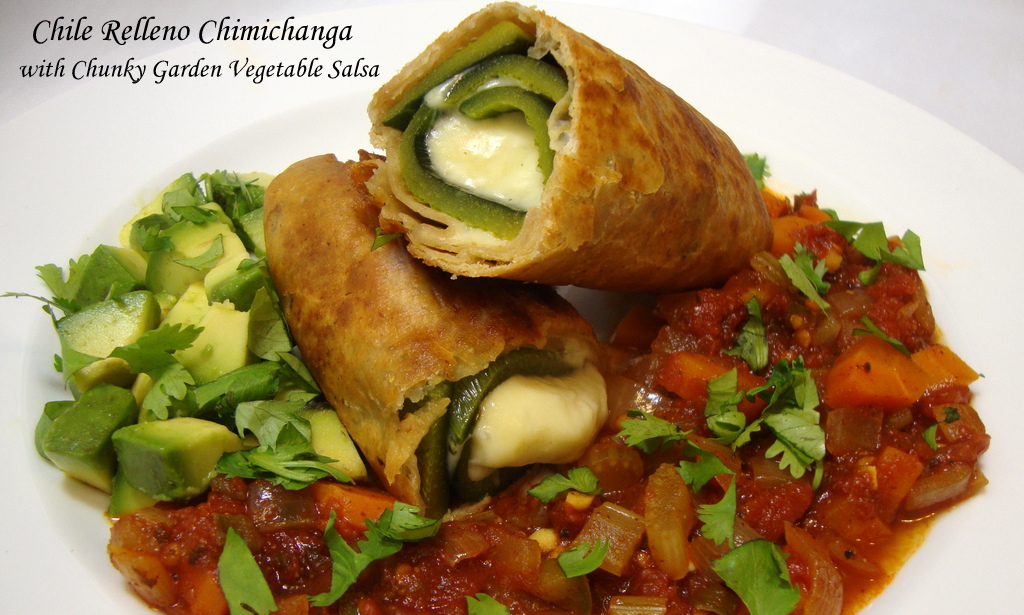 This dish is an original creation and is based upon the classic Chile Relleno; but rather than stuff the Poblano or Anaheim peppers with cheese and then batter them, the peppers are roasted and wrapped in soft tortillas with melted non-dairy Monterey Jack and flash-fried in a small amount of cooking oil (rather than deep-frying in a large amount of oil). The results are delicious and so much less greasy than the traditional dish. I chose the cheese melt over shredded block cheese since the chimichanga is flash-fried very quickly, which wouldn’t give the shredded cheese enough time to melt. The cheese melt is quick and easy to make too! (recipe follows)

Technique:
Prepare the salsa first since it requires about 45 minutes of cooking time. If using pre-prepared salsa, skip to the next step.

Roast the chilies on a hot grill or under a broiler. Turn them occasionally until the skins are blackened and charred. When the skins of the chilies have sufficiently charred and blistered, place them on a plate and cover with foil until cool. The residual heat will steam the peppers under the foil and fully cook them through. When cool, peel the skin from the chilies (they will remove easily) and blot them with a paper towel to remove any excess moisture. Cut the peppers into strips (you will need the strips of 1 pepper per tortilla); set aside.

Prepare the cheese melt according to the directions and keep warm over low heat until ready to assemble the dish.

Next, place a tortilla directly on the stove burner set to low heat. Flip after about 15 seconds and repeat as necessary until the tortilla is heated through and is soft and pliable.*

*An alternate method for heating the tortillas is to preheat the oven to 350°F. Wrap the tortillas in aluminum foil and warm them in the oven for approximately 15 minutes. The tortillas can also be wrapped in a damp towel and warmed in the microwave for about 15 seconds; or they can be misted with a spritz of water and heated briefly in a hot non-stick or cast iron skillet.

Place a tortilla on a work surface and place the pepper strips on top. Spread ¼ cup of the melted cheese over the peppers. Begin rolling the tortilla over the pepper/cheese mixture and fold in the sides as you roll (like wrapping a burrito or spring roll). Secure the seam of the tortilla with 2 toothpicks and repeat with the remaining tortillas.

Place the skillet with the oil over medium-high heat. When the oil begins to shimmer, fry the chimichangas until golden brown, turning with a pair of kitchen tongs. They will brown quickly, so turn frequently (it is advisable to only cook 1 or 2 at a time since they brown so quickly). Transfer to a plate lined with paper towels to drain. Remove the toothpicks.

To serve, place on a serving plate and garnish as desired. Serve with the salsa.

Chunky Garden Vegetable Salsa
Salsa is the Spanish word for “sauce”. This is a cooked salsa which is served hot and is wonderful for topping a variety of Tex-Mex inspired dishes such as chimichangas, burritos and Tex-Mex tofu scrambles. Despite the inclusion of fresh jalapeno pepper, the sauce is relatively mild. To spice it up add a little chipotle chili powder or minced habanero pepper, to taste.

Technique:
Drain the excess juice from the tomatoes (reserve for other uses) and pulse the tomatoes in a food processor until puréed but still chunky. Set aside.

Add the oil to a cooking pot and place over medium heat. Add the carrots and sauté for a few minutes. Now add the onions, celery, jalapeno and a couple pinches of salt and sauté until the onions are translucent and the vegetables have softened, about 10 minutes. Add the garlic and continue to sauté an additional minute.

Add the tomatoes and the chili powder, cumin and oregano. Season with black pepper as desired and bring the mixture to a simmer. Cover the pot and reduce the heat to low. Cook for about 45 minutes or until the carrots are very tender, stirring occasionally. Season the salsa with salt as needed and keep warm until ready to serve.

Monterey Jack Cheese Melt
This popular, mild white cheese can be used for a variety of Spanish and Mexican inspired dishes and is excellent as a spread for grilled cheese sandwiches. This recipe yields about 1 cup of melted cheese.

Technique:
In a small saucepan, vigorously whisk together the ingredients until smooth. Cook the mixture over medium-low heat, stirring slowly and continually with a flexible spatula.
As the mixture thickens and curdles (forms lumps), begin stirring vigorously until the curds disappear and the cheese becomes very thick, smooth and glossy. Keep warm over low heat, stirring occasionally, until ready to use. For a spreadable consistency, remove from the heat and allow the melt to thicken. 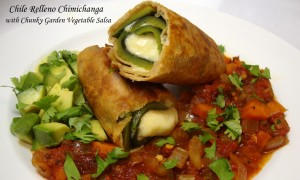